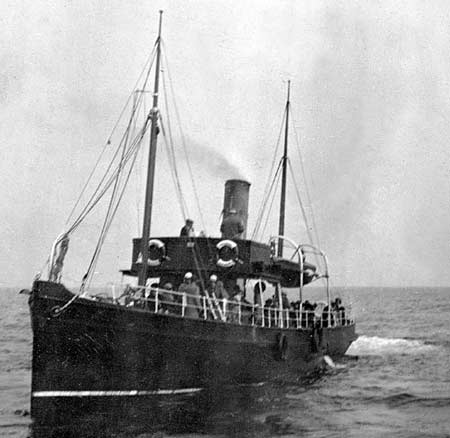 The steamship 'Ailsa', whose captain was John Watson, was very much a part of the romantic scene of the harbour in the twenties and thirties, with her mass of gleaming brass and flying bridge. She plied a passenger and tourist trade between Cromarty and Nairn and during the Nairn Games Day would make as many as three trips starting at 6am, carrying about 120 passengers on each trip.

Apart from her frequent visits to Nairn during the summer months, the 'Ailsa' also ran to Inverness with passengers and cargo, to Fort William with potatoes and from Kinlochleven to Invergordon with aluminium. Captain Watson was a legend in his lifetime, having sailed round the world several times in wind-jammers. For years he was coxswain of the Cromarty lifeboat and was reputed to have saved 72 lives at sea in various parts of the world.


Picture added on 01 January 2003
This picture is in the following groups
Interview with Clem Watson
The Ailsa - the ferry between Cromarty and Invergordon
Comments:
I am looking for information about my gr.gr.grandfather who drowned on the 31st of Jan 1889. He lived in Invergordon and was a crew member of a ferry boat. His name Donald/Daniel Hogg age about 35 this is all the information given in his death certificate, any info would be great.

Added by Anna Hogg Verner on 16 February 2004
I have stumbled across a copper printing block with the Ailsa on it dated 1906. It is very interesting to find so much info about it. Thank you. Tom
Added by Tom Atkins on 05 May 2006
I am currently doing some research for a friend about what eventually happened to Ailsa, was she scrapped, is she sitting in a boatyard some where? Any information is greatly appreciated.
Added by Alan on 21 May 2006
Alan, The 'Ailsa' was sold to someone in the Orkneys just before the start of the Second WW. I am the grandson of the owner Capt. John Watson, Cromarty. The vessel was built in Troon. I still have some old box camera B & W photos, which can be copied, e-mail me thro' this site.
Added by Clem Watson on 23 May 2006
Ailsa is mentioned in the book "Days of Orkney Steam". It seems she was built by the Ailsa Shipbuilding Co in 1906 and used on the Clyde before coming to Cromarty. She was purchased by John Laird of Burray in May of 1938 and used for ferrying around the south isles of Orkney (pre Churchill Barriers). She was requisitioned by the Admiralty at the outbreak of war, but continued to be available on certain days to maintain her civilian role. In 1943 she was completely taken over by the Admiralty, and eventually used in the Normandy Landings. Her final fate is not recorded.
The same book tells us that Ailsa had been purchased by the same John Laird to replace Sutors, a vessel he had bought from the Cromarty Steamshipping Company in 1925.
Added by Ronald Stewart on 20 June 2006
Reading the comments on the "AILSA" I remember my Grandfather John Skinner "Anda" telling me that the "AILSA" was often used on lifeboat duties. Presumably this was before the arrival of the motor-lifeboat "JAMES MACFEE".
The previous two lifeboats were the "Pulling and Sailing" type which were obviously much slower than the "AILSA. Could this be correct? Maybe Clem Watson would know?
Added by Alex Grant on 01 June 2009
I would very much like to get in touch with the contributor of this photograph, Clem Watson. If you could contact me at niall@taindigital.co.uk, that would greatly appreciated thank you.
Added by Niall Harkiss on 20 June 2013