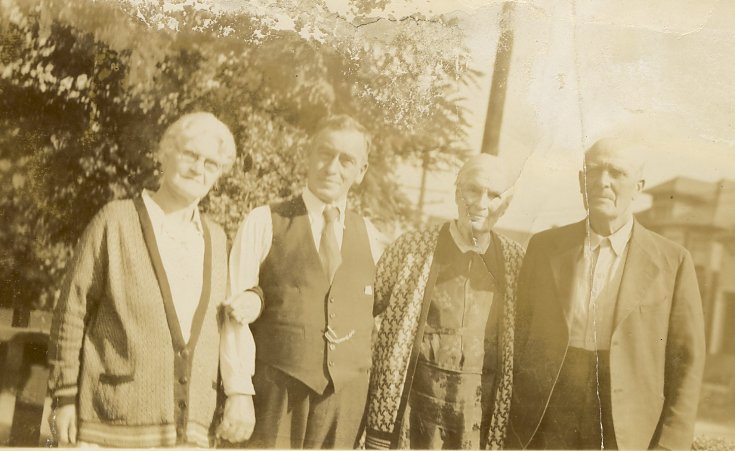 Barbara says: "In the photo is my grandmother Catherine, second from the left, my uncle John beside her and at the far right my aunt Bella (not sure of her married name, it could be Skinner or Urquart). And I don't know if the man next to her is her husband. I wonder if anyone can shed some light on this for me."

I know I've seen this photo before. Sorry, I can't remember who the other man was.
Added by Camilla Riera on 30 March 2007
Camilla. I am curious to know where you saw the photo. Are any of them your relations? Thank you Barb Tocher
Added by Barbara Tocher on 31 March 2007
Is this Camilla de Gerard (daughter of Skil de Gerard and Nellie MacLeman)?
I have Nellie MacLeman as the daughter of Hugh MacLeman and unknown unknown.
And Hugh MacLeman (b. May 14, 1867) is the son of William Watson MacLeman and Catherine Watson.

I am the daughter of Nellie Rose McLeman and Carl Christian Skeel de Gerard (Skeel-Gerhardt in Denmark). My Mum's parents were Hugh McLeman and Jean Skinner. She also had a brother named Lesley, who died around 21 years of age.I was surprised to see this photo. My eldest daughter, Dina, sent it to me as she has been looking into our family tree. There is also a photo of an Isabella McLeman and I'm wondering if she was Grandma McLeman's sister?

Barbara, do you have a brother named Bill and a father named Donald McLeman?

Camilla
Added by Camilla Riera on 01 April 2007
Camilla: Sorry.. I didn't see the top part of your reply re: Great Grandma and grand uncle Jack. Would love to have a chat with you if you are interested. Do you live in Vancouver? I am in North Vancouver.
Added by Barbara Tocher on 01 April 2007
Camilla: Yes I have a brother Bill and my Dad was Donald. If you remeber we came to live with your Granfather and Auntie Kate et al when my mother died in 1938. Please e-mail me at barbaratocher@shaw.ca I have lots of info to fill in re the Family Tree. Cousin Barb
Added by Barbara Tocher on 01 April 2007
Hi Barbara:

I live on Vancouver Island now. Maybe we could email each other?
I believe Mavis and Lesley both moved up to the Okanagan somewhere.

Do you have some way of getting my email address off this site?

Camilla
Added by Camilla Riera on 01 April 2007
No Camilla I can't seem to get your e-mail address. All it says is cj buit no server. My e-mail is on the site ...... barbara tocher@shaw.ca ...... Hope to hear from you soon. Barb
Added by Barbara Tocher on 01 April 2007
Camilla, I would also like to communicate with you by email. My email address is davidw.roberts@sympatico.ca

I can email you what I have on the MacLeman and Watson family trees and maybe you could help me fill in some of the blanks on your children and siblings.

I live in Scarborough, Ontario.
Added by Ian Roberts on 01 April 2007
Hello Barbara
I have been emailing back and forth with Ian Roberts and I now realize that Isabella Watson McLeman b.1838 is my grandmother Martha Watson Starratt's Aunt! Growing up, we often heard that my sister Jeanne's dark golden blonde curls with honey highlights were just like Aunty Bella's! Do you have a portrait of her in her younger days? Also, I have not confirmed but believe that my Grandmother went to live with her Aunt Catherine on Vancouver Island when she emigrated from Scotland. Can you confirm? Photos? I live in Burnaby near Metrotown and I see that you live in North Vancouver. I would love to hear from you and I will repeat this message on your email address. Regards, Carolyn
Added by Carolyn Willmore on 01 April 2010
For those interested, I am very sorry to say that my Mom, Camilla Jean Riera passed away on July 15th, 2010 in Victoria. Survived by her children, Dina McAmmond, Cynthia Riera, Carla Jackett, Jay Riera and Carol Riera Sterckeman and their respective spouses and children. Private family memorial only. We miss you Mum. xoxo
Added by Carla Jackett (nee Riera) on 16 November 2010
So sad to hear about Camilla. Ian introduced me to her when I began researching my family tree a few years ago. I am the great great granddaughter of Catherine MacLeman by her daughter Elspeth. Elpeth married William Faulder Robertson in 1900 in Vancouver BC. Their son John (July 10th, 1903) who went by Jack is my grandfather. His son Jack Lorne ( June 21/1933) is my father. He married my mother Margreta Edith Swanson in Aug 1958. I reside in Delta BC Canada.
Added by Lorraine E Bascombe (nee Robertson) on 15 January 2014
Hi, I am Carol Riera, Camilla's youngest daughter. My husband and I were just in Cromarty and met George (Dord) Macleman and his wife Jean. Do you know if they are the same bloodline as my mom's grand-pa, Hugh NcLeman? Thank you.
Added by Carol Riera on 22 July 2015
Hi Carol, how lovely to see the area of your ancestors. We visited 5 years ago, but did not make our way to Cromarty. My understanding is there is a relationship. Ian Roberts would be able to give you the most info.
Anonymous comment added on 01 August 2015
Thank you!
Added by Carol Riera on 01 August 2015
Ok. Thanks. And please excuse the typo. Of course I meant Hugh McLeman.
Added by Carol Riera on 02 August 2015
My name is Lesley Karen Skeel Gerard (Skeel-Gerhardt)in Denmark. My sisters are Camilla Riera and Mavis Brommeland. The photo is of my Great Grandmother, Great Uncle Jack, Great Aunty Bell and the other man looks very familiar but can't place him.
I have met my half brother Jorgen (deceased) in Denmark, his sister Merete and another half sister Elsa (deceased) Merete now lives in France.
Added by Lesley Roy on 19 March 2016
Hi Lesley, I am one of Camilla Riera's, (nee Skeel Gerhardt) 5 children. Her Father Carl Christian left Canada when my Mom was a small girl and remarried your Mother I presume.
Do you know where U can see examples of Carl's model ships he used to build? I heard some were in Danish stamps some years ago. Regards, Carla Jackett
Anonymous comment added on 23 March 2016
Hi CARLA. I am your Aunt Lesley.
Your mother (Camilla)) is my sister.
Your Aunt Mavis) is my younger sister.We all have the same Mother.Nellie Rose McLean and same Father.I remember very well when you were born.I am out of town right now but when I get back to Burnaby I will be in touch.I can give you lots of information about your Grandfather and the Steel family
Added by Lesley on 24 March 2016
Thanks Lesley,
Regards
Carla
Anonymous comment added on 28 March 2016
Does anyone know if there are any relatives of Hugh McLeman or Jean Skinner alive today in Scotland? They were my Great Grandparents on my mother's side, Camilla Jean Riera (nee Skeel Gerhardt) from Vancouver, Canada. I am going to the UK and hope to visit Scotland if time and see the areas of my ancestors. Many thanks, Carla Jackett (nee Riera). Now living in Australia.
Added by Carla Jackett (nee Riera) on 23 February 2017
You can find more info about this family (Skeel-Gerhardt) Google Kannegaard and Skeel family
Added by Peter Kannegaard Hansen on 12 April 2021
Thanks Peter! I never got to Scotland on that trip unfortunately. I hope you and your family are keeping well through this Covid-19 pandemic.
Warm regards, Carla Jackett (nee Riera)
Granddaughter of Nellie Macleman and Carl Christian skeel de Gerhard but my Grandfather left my Grandmother when my mom Camilla and her 2 siblings were very young and went back to Denmark so I never met him.
Added by Carla Jackett on 13 April 2021