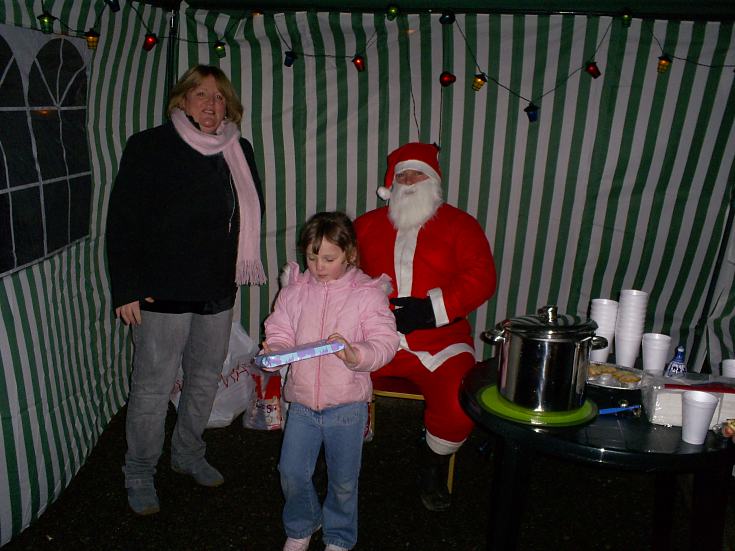 The Townlands Park Committee decided that they would organise a 'Santa's Grotto for all children living in Townlands under the age of 16. They all received a present each and there was mulled wine and mince pies for the parents. The committee is run by Carol Maclean, Kathleen Noble, Nora Watson and Sarah Whyte.

Amongst the children there were Natalie Murray, Abby Lewis, Rhys, Antonia, Nathan Urquhart, Cassey, Jena Whyte, Dean Mackay, Emily, Gary and Jamie Kelly. They looked fantastic. It was a lovely idea and much appreciated by myself and the other parents that were there.

Thanks to Neil Urquhart who helped to make sure Santa could be there!
Picture added on 07 February 2007
Comments:
i luved that day ans i thought that it was really fun. thanks to allof my friends.
luv antonia xxxxx
Added by Antonia on 12 March 2007
Can somebody please identify the people in this photo for those of us who don't know them??
Added by Gerald Cronkwright on 23 May 2007
The guy sitting on the right in the red suit is called Santa Claus. ;)
Added by Kirsten Fleetwood on 25 May 2007
Kirsten, thanks for indentifying Santa Claus who was indentified under the photo verbage but it was the older and younger persons that I was interested to learn more about.
Congratulations to you and Mr. Fleetwood on your wedding day in 2004 as shown in picture #945.
Added by Gerald Cronkwright on 27 May 2007
that was a good day
i known who santa is its my dad its a secret
hahahahaha
Added by Kaitlin on 25 July 2007
The woman in the photo is Sarah Whyte and the girl is her daughter Cait.
Anonymous comment added on 09 November 2007