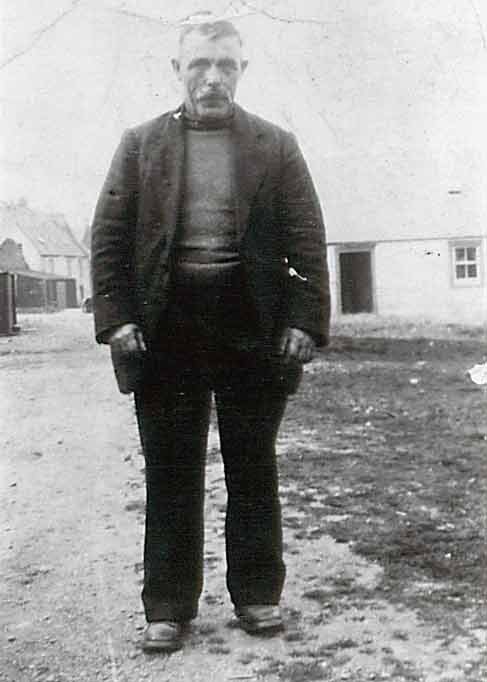 My great grandfather and the last of a very long line of fishermen. To those with a passing interest in tracing your family here are some of the pitfalls with particularly the Cromarty fishing families; Daniel was Christened Donald, married as Donald but was buried as Daniel. To his family he was Daniel but most Cromarty folk would have known him by his nickname "Strecht". There are also numerous marriages between cousins as was Daniels to his wife Jane Hossack (nee Hossack).

Mick
Added by Mick Atha on 11 September 2010
Hello Mick, Donald would be the first cousin once removed to Andrew. I'll send you something that may help sorting it all out.
Added by Andrew Bathie on 11 September 2010
Hi Mick, I see this is a rather old post but I'll add to it any way. Andrew b.3.3.1839 was the youngest brother of John b 24.01.1832. John is my g.g.g.grandfather who married Mary Hogg 18.10.1850. Their eldest John b. 05.01.1852 m. Mary Wilson. Their 3rd child James Mouat 1882 was my g. grandfather, his boys James Mowatt, Thomas Harris, and William(killed in Suda bay Crete 1941). James my Grandfather d.1978 Rotorua NZ. and his son Ian is my dad.
Added by Malcolm Hosssack on 24 January 2012
Is this the same Daniel Hossack who owned the wee bothy in Fishertown Cromarty? I have recently uploaded a picture,
Added by Mark Bown on 04 March 2012
Hi to all Hossacks. Some of you on this site have a lot in common with my side of the Hossack's which go back as far as James Hossack and his wife Emily Grace Jones. But I have got to my father and he was James Philip Larid Hossack. Anyone know of him and has a photo of him would love to see it PLEASE?
Added by David Hossack on 17 March 2012
Hi all. My Hossack is Mary Hossack. She married Walter Ross around 1778 in Cromarty and most of my other tree line are from this area also. Anyone know where the name originates?? if so please let me know.
Added by Lynne on 12 July 2012
Hi another enquiry....my Grandfather was Colin Hossack married to Mary Brydon they had 2 children Hugh and Catherine. Colin emigrated to Vancouver after Mary died. Anyone anywhere if you could help.
Added by Anna Erdamar on 15 August 2012
Hi Lynne, my grandfather said the name Hossack originates from Norway - Allison nee Hossack.
Added by Allison Grimshaw on 18 August 2012
Hi Mick (11 Sept 2010) and Malcolm (24 Jan 2012) - Old posts I know but just to say that John and Catherine Hossack are our common ancestors. I am descended from their middle son David (born 1834) through his daughter Jesse who married my g.grandfather Hugh Fraser in June 1894.

To step back one generation from Catherine Manson my aunt believes that she has traced Catherine's parents. Her research has led her to a David Manson and his wife Catherine Sutherland who had a daughter Catherine Manson who was baptized 3 Aug., 1812. In the 1814 Militia Records for Cromarty there is only one Manson recorded - a David Manson whose age is given as 31 and whose occupation is a fisher. Assuming his age is accurate that would place his birth year as 1782/1783.
Added by Donald Macleod on 19 October 2013
Dear Donald, Lovely to see your post regarding our distant connection, now stretching back into the late 18th century! Did David stay in Scotland or also, like Andrew, head south? Andrew eventually ended up working as a coalminer in Yorkshire - what a change of environment (but equally as dangerous I suppose). Look forward to hearing any information you have on my great grandfather's brother David's life. All the best, Mick
Added by Mick Atha on 30 October 2013
Hi Mick - Sorry for the delay in replying. Here's an extract from my aunt's records who has worked on our family tree. She writes: "the Hossack family moved around a lot. Dad, David, was born in Cromarty. Mom, Helen Clunas, was born in Skye. The children - Mary Jane, aged 12 in 1881, was born in England, Isabella (9) in Redcastle - I wonder if my mother (Eliza Fraser) knows anything about that - Jessie,(7) my grandmother, in Petty,[near Inverness] Thomas, (5) in Petty, Robert, (2) in Auldearn and Agnes, ( 6 months) in Auldearn, Nairn." So it seems David was in England for a while - I wonder if he was with Andrew?- and then returned to Scotland. Other than that I am unaware of what happened in his life. Jessie is my g/grandmother. Best wishes, Donald

Added by Donald Macleod on 30 December 2013
Hello All, Maggie Schneider (nee Hossack) Father Charles Haig Hossack, mother Catherine.
Added by Maggie Schneider on 06 March 2014
I was wondering if the man in the pic is related to me he looks so much like My dad
Added by Diana hossack on 18 January 2016
This is a picture of my Great Grandfather, My Grandfather was Sammy Hossack who married Elizabeth ( Betty) Taylor.
Added by Sammy Hossack-mavridis on 07 February 2017
This is a photo of my grandfather. I think my uncle Sam was best man at my Mum & Dads wedding in 1940. His older brother John(Jock) was a prisoner of war (1st.) age 16/17. Jock was in Canada And dad in the USA in the 20/30's. Dad & uncle George look nothing like the photograph.
Added by David Hossack on 29 May 2017
Found this whilst looking for information on a painting I have of Sir John Hare (actor 1844-1931) which is signed F Hossack:
"... a road on the Gainsborough estate which commemorates James Francis Clark Hossack (1868-1937) a local doctor of the East Suffolk and Ipswich Hospital, who was a member of the Borough Council 1908-1929 representing St Margaret's Ward, mayor in 1929 and became an alderman in 1930."
Here: www.ipswich-lettering.co.uk/streetnames.html
Added by P Sketcher on 18 September 2017
Hi my name is Pamela Brightwell nee:- Hossack, the photo is of my great grand father, and his son James was my grandfather. My father is Donald Hossack d.o.b 03.08.1931 in Ross & Cromarty he lived in a cottage in the Big Vennal, his mother was Mary Hossack nee:-Hinds, he had 4 brothers Jimmy Hinds, Roddie Hinds, Jock Hossack, William Hossack.
Added by Pamela Brightwell on 18 June 2021
My 6x grand dad was William Hossack 1732 he married Christine Fiddler love to know any information please x
Added by Lorraine newby on 15 July 2022