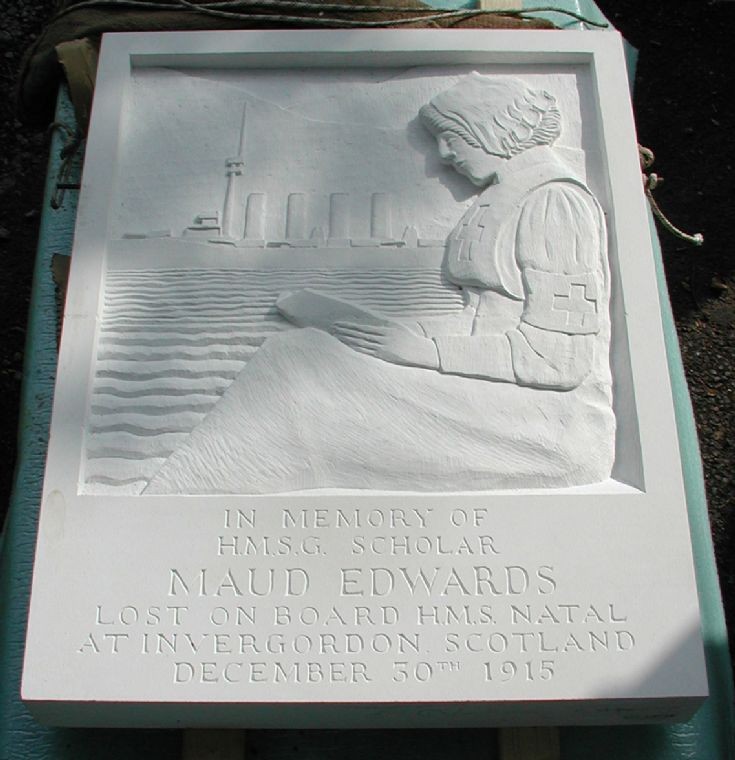 Picture taken in 2004 at Haberdashers Monmouth School for Girls.

The memorial stone depicts Nurse Maud Edwards, latterly a scholar of the school, who lost her life when visiting the Ward Room of HMS NATAL on 30th December 1915. She was with two other nurses from the hospital ship SS DRINA, anchored in the Cromarty Firth at the time. Maude is shown wearing her nurses uniform.

The stone is French limestone from Lens. North east France.

Designed and carved by Philip Chatfield. Sculptor at the school in 2004.

Philip Chatfield's grandmother was a schoolfriend of Maud Edwards, a fact only found out after the carving had been installed.

Photograph shows the stone memorial prior to installation.
Picture added on 30 August 2010 at 14:06
This picture is in the following groups
The Natal - Warship destroyed by an explosion off Cromarty during WW1
Comments:
Maud Edwards was a Reserve Sister in the Queen Alexandra's Royal
Naval Nursing Service.
Added by H MCKILLOP on 17 August 2014

The Natal - Warship destroyed by an explosion off Cromarty during WW1