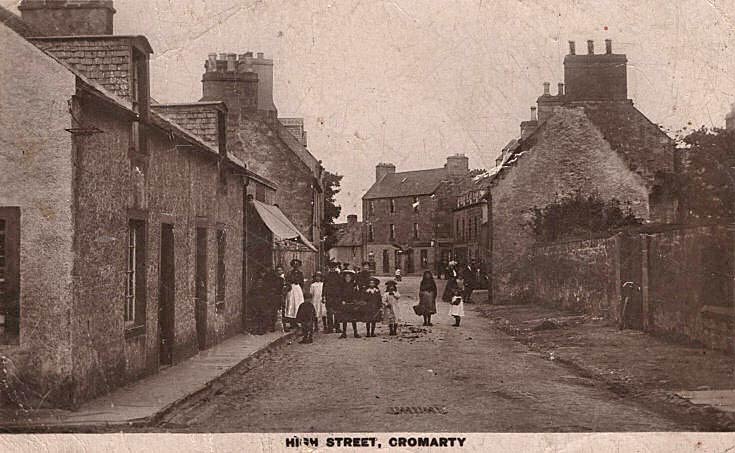 Unused postcard looking down High St. Ther's an awning outside the shop and a metal frame, presumably for street lighting on the corner. If you view the large version you can see that some of the children have tennis raquets, and there's a bicycle leaning against the gates to Bank House garden. On the right, there's a house sticking out into the pavement which can be seen from the other direction in picture #643 and picture #147. There is a drain in the foreground which is not visible in later pictures, though picture #2308 shows a hydrant nearby.

Zoomify
Picture added on 22 May 2011 at 22:05
Comments:
Hello Jean. Is this the Jean Mcbeath who used to run the shop with Roddy?? The same Jean I used to buy crisps and nutty from?? If it is, I'm happy you're still around, I hope you've discovered the secret to immortality!!
Added by Tony Archer on 24 May 2011
I love these old photos.
Added by Jess Alexander on 25 May 2011
Hi Tony. It is the same Jean, participating here by proxy! I'll pass on your comment. She and Roddy are both pretty well and still living in the house on the corner. Roddy had his 90th birthday a couple of months ago.
Added by Estelle Quick on 25 May 2011
Wow. This is a beautiful old shot of High Street...with the shop on left being 17 High Street .. My Mum and Dad .. Eva and Johnny Macdonald had the shop in the early 60's ..it's great to see what it looked like way back when this was taken!!
Added by John Macdonald on 26 May 2011
Hi Estelle, participating by proxy. Thank you for passing on my comments, you must also wish Roddy a belated happy birthday for me, I'm very pleased they are both in good health.
Added by Tony Archer on 26 May 2011
Watch this space John... I'm just about to photograph and post a picture of something Jean and Roddy found in their garden years ago.
Added by Estelle Quick on 26 May 2011
Estelle ..can't wait ??If it was money ..it must have been mine , and I dropped it lol... If I remember rightly a Mrs Cross had the house and shop before my Mum and Dad ? ..and in the attic ..we found a beautiful "lum hat" those were the days !!
Added by John Macdonald on 27 May 2011
My late Mam, Peggy Cowie (MacLeman) was good friends with Mrs Cross. She was a very old lady but I remember visiting her and loving her small walled garden with a lot of ivy and paving. When we first saw our house here there was a lot of ivy in the garden and I remembered Mrs Cross.
Added by Margaret Tong on 28 May 2011