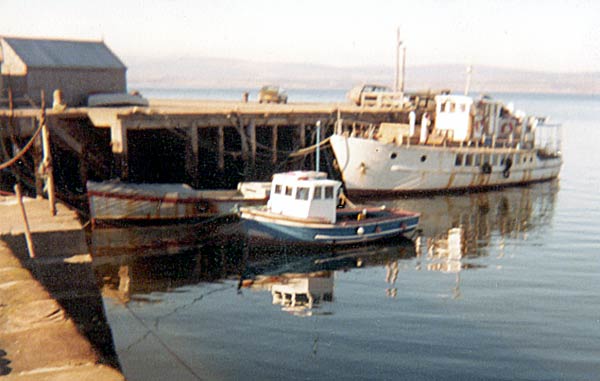 Looking north-west from the harbour. The rusty boat on the left was owned by Albert Watson who lived on George Street. Originally a naval tender, he occasionally used it to take groups for a tour around the firth. In later age, and after the death of his wife, I believe that he beached and then burned it. The larger vessel on the right (do you know it's name?) was used to ferry rig yard workers over to Nigg.
Picture added on 01 January 2003
Comments:
Albert's boat was the Enterprise, and he also had another similar which was known as the Endeavour. The larger boat is probably the Coral Princess.
The Enterprise was built by Albert's father and the Endeavour was a barge from the Natal.
Added by Eric Malcolm on 04 February 2003
The white boat is the Coral Star, the blue and white boat is the one my husband built at the gable of our then house.
Added by Sue Florence on 24 March 2003
The Enterprise was a Thornycroft hull design, modified by his father, and built in larch of which Albert was very proud. The Endeavour had been built in Burma and was double diagonal Teak to Naval specs, and was intended to be rowed as well motor. Both had Kelvin petrol/paraffin engines. The Enterprise would do about 7 knots whereas the Endeavour would be lucky to make 5! When the Endeavour was used as the Nigg ferry a few of us as youngsters would get to help John Watson take the boat over after school. It was great fun when the tide and wind made some waves that you could head straight into so stopping the boat and even ending up going backwards.
Added by Dennis Manson on 03 December 2003
Sue is right the boat is Coral Star III.
Added by Ronald Young on 25 January 2004
picture #1695 would suggest the ferry is the Souters Lass.
Added by Garve on 31 July 2006
Garve this is definately Coral Star III. Souters Lass left Cromarty about 2 years? after she arrived giving her a leaving date of about 1976 so there, s no way this pic could be her. Anyway i remember Coral Star III with great ease but have no memory at all of Souters Lass.
Added by Ronald Young on 01 August 2006
Garve this is the Coral Star not only did I lurch across the firth on her to go to work, I also have a pastel drawing of her by Simon Gunn. dated 1984.
Added by Sue on 24 August 2006
This is the coral star.......it used to be a playground for the local kids!!
Added by Anon on 28 September 2006
Oh this is the Coral Star all right. I fell off her wearing my wellies and couldn't swim - Dickie pulled me out. I still owe him a pint for that.
Added by Willie Nicolson on 05 February 2007