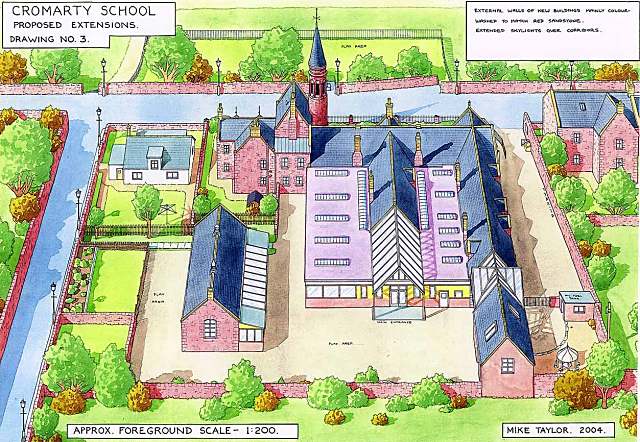 Last year, the School Board formed a building sub committee made up from members of the board, a number of parents and interested members of the general public. This committee was formed in response to concerns that the School Board has had for some time regarding the general condition of the school buildings. After a very helpful initial meeting with Mr Hugh Fraser from the Highland Council, the Board decided to task this committee with looking at exciting and innovative ways to renovate and refurbish the existing school buildings. Although there is no guarantee that these plans will be adopted, the School Board felt strongly that being pro-active and working closely with the council could only help our long-term goal of a major refurbishment of the school buildings. To help with this task, Mr Fraser provided a clear indication of exactly what would be required in terms of space and facilities in a school catering for around a hundred pupils.

There was general agreement within the committee upon many design aspects and these became clearly evident at the following meeting where a number were submitted for discussion. All of the designs suggested retaining the existing sandstone buildings as it was felt that these were a major asset to the town. They each also suggested the removal of the external classrooms (HORSA hut) situated in the playground to the rear of the school and that any new building should be concentrated upon the area at the rear of the school in order to create one central block, which would be far easier to manage and maintain. At the end of the meeting, it was agreed the board would take all these ideas and create a final plan which would then be professionally illustrated and forwarded to the council.

The Illustrations are two of four drawings that were produced for the School Board. The first drawing shows a birds-eye view of the suggested finished building complete with a new glass covered entrance. The drawing also shows the new playground space with the old classrooms removed and the bicycle sheds taken down. The sheds have been replaced with a new storage block that visually continues the line of the existing classroom block (on the left of the drawing). However, there is a covered glass canopy linking it to the main building.

The second drawing shows a plan-like view of the school. It shows a large entrance area, new toilets, two new cloakroom areas, two large classrooms, two new offices and staff rooms, a sick room, disabled toilet and a boiler cupboard. The drawing also shows the existing toilet block being returned to a multi-purpose room with library facilities and another small room for one-to-one teaching. All of these facilities are accessible via a two metre wide passageway that circles the entire central part of the school. The existing classrooms have been retained as has the hall although storage space at the rear of the hall has been increased by the removal of the electrical equipment which we have suggested be replaced by a new under-floor heating system. This also means that the existing, large, wall-mounted heaters throughout the school could be removed giving back large amounts of usable wall space and storage.

PLEASE NOTE: These are just design ideas at this stage and represent what the School Board would like to see in terms of refurbishment of the school. However, the final decision about the plan and the timescale for the work will eventually be taken by the council and their architects.