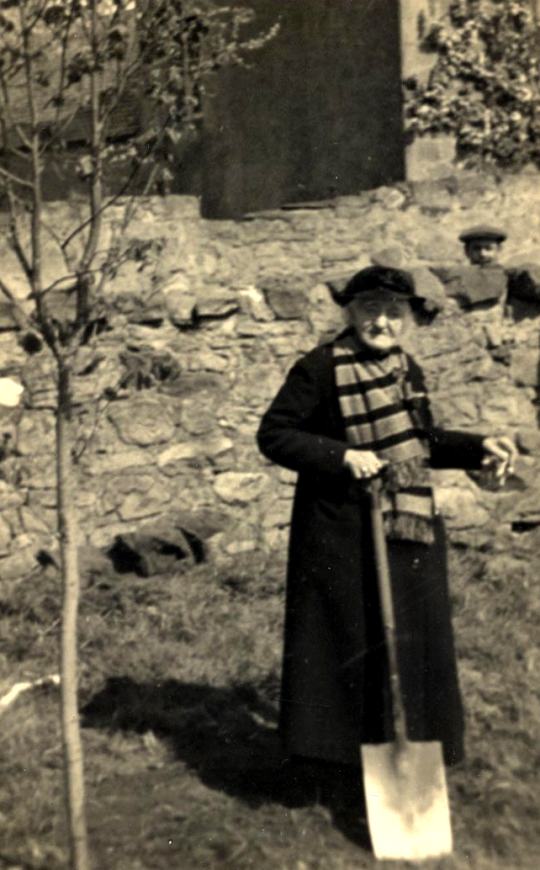 Mary says "This is a photograph of my great grandmother, Marion Davidson - mother of Bella and Mary. I have some statistical information, thanks to my brother, Robin Munro, who is in the process of doing some research into the family."

"We do not have a date of birth, and the details of Marion's age do not tie up in different censuses, but she appears to have been born around 1850."

"She was in service as a cook/domestic servant in a house in Bank Street (I would love to know which one!) and married William Davidson, Baker in 1888. The census of 1891 shows them staying at number 9 Church Street which, interestingly, was, many years later, Chapmans newsagents shop! Later they moved to 26 Gordons Lane (I think my mother was born in Gordons Lane but am not sure if it was the same house)"

"We have not yet been able to determine a date of death for Marion but she looks quite old in this picture (rather too old to be wielding a spade!)"

Any ideas where this is? There are two walls behind Marion, with presumably a road in between. Behind the second wall is a large house -you can see a slated roof through the trees on the left.
Picture added on 23 March 2004
Comments:
tsk tsk Mary! "Too old to be wielding a spade?" i'd say she's rather too well dresesed to be digging and delving. Maybe she was using the spade as a walking stick? Who's keeking over the dyke?
Added by Margaret Tong (Cowie) on 23 March 2004
I agree with you, Calum. Marion has just planted a tree, or at least has been part of the process.
Added by Margaret Tong (Cowie) on 24 March 2004
The ground at her feet looks quite muddy, and what looks like a sack or sacking is at the base of the dyke to her rear. That young tree also features quite significantly in the picture - could she have just planted it?
Added by Calum Davidson on 24 March 2004
What a nice thought! I wonder if the tree is still there and, if so, how big it is now? If anyone can identify where this is, perhaps we will be able to find out.
Added by Mary Campbell (Munro) on 25 March 2004
Interested to hear about the Davidsons of Cromarty. We recently spent a day in Cromaty looking around the town. My wife's GG grandfather Roderick Davidson was born in Cromarty in 1838 and died at sea about 1863. He married Harriet Hindmarsh [born in Cromarty in 1841] in 1860. Harriet worked as a domestic servant for Colonal Ross and later lived at 4 Bank Street and then at Mrs McKenzie until her death in 1925. Their son Foster emigrated to Australia. We are interested if there is any connection between the families.
Added by Allen Linning on 20 June 2006
In response to Allen Linning, there were evidently at least two families of Davidsons in Cromarty in the 19th Century and there does not appear to be any connection between Roderick and Marion, my great grandmother (1855 - 1935). Her husband was William Davidson (1838 - 1923) whose father, David (1812 - 1880), was an incomer from Invergordon, evidently to work in the factory, and William's siblings did not include Roderick.

As a separate matter, I was interested to discover recently that one of William's sisters, Helen (married surname Sim) died in Hugh Miller's Cottage on 27 December 1909. This location seems surprising since I believe the cottage was by then a museum under the auspices of Cromarty Town Council. I wonder if the cottage archives have any record of the circumstances?
Added by Robin Munro on 02 August 2006
Thanks for the information Robin. We have traced the Davidsons back to a John Davidson born c1780 and his wife Katherine Ross born c1784 . Among their children were a Roderick [father of the one mentioned in my previous note] and a David born 1812 at Rosskeen so perhaps there may be a connection.
Added by Allen Linning on 31 August 2006
I'm sure Robin has already told you that we are related, I have only seen his research.
Added by Irene Davidson on 21 December 2012
Robin informed me you and my wife are related several generations back. I will be sending a photo of some of the family to Cromarty Images.
Added by Allen Linning on 04 January 2013