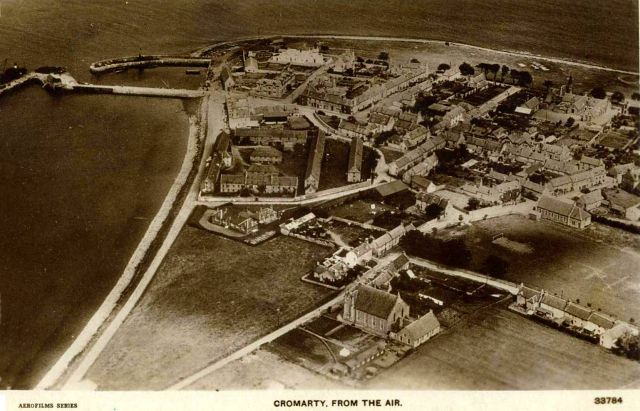 This is a brilliant shot showing some amazing detail, especially on the large and zoomified versions.

Starting at the bottom, there is no Bayview nor is the White House built. Next to the West Church there looks like a patch of allotments. At the foot of the Denny the houses of the Sloochd Moochd are still in place with large sheds at the bottom of their gardens near the hospital.

Victoria park has football goals, but I can't see any playground equipment, 'though a worn patch of grass may show where swings are. Only a small shed is shown beside the hall, so Beryl's house must have been built and knocked down between the date the photo was taken and now.

Keeping to the right of the picture, there's an odd circular feature at the back of Townlands barn. At the school, the HORSA hut has not yet been built, and above that the links look much less flat than nowadays.

Coming back towards Bank St, the shop buildings which were burnt down [picture #83] and replaced by the current supermarket can still be seen. Two other houses which would be destroyed by fire are also visible - 23 Bank St on the corner of Bank and Barkly Streets, and Barkly house on the Braehead which is being rebuilt as I write [picture #1011].

On the corner of Bank St where it joins Allen Square there are houses which I've never seen before, and once into Allen Square we can see the fifth factory building and Cathel's shed where the current Surgery car park is.

Finally, at the harbour the Girnal is still in place and if you look closely you can see the Slide [picture #85] in the V's at the back of the harbour sheds.

Zoomify
Picture added on 03 February 2005
This picture is in the following groups
Zoomified Pictures
Comments:
Paul, this is a cracking photograph, but I wonder about the date. The first recorded sighting of a plane in the area (a Bleriot Monoplane called the Firefly, flown by a Mr B C Hucks) is recorded as being at the Strathpeffer Highland Gathering on 24th June 1912. The sharpness of the photo probably rules out a plane anyway because of the vibration. I wonder if it was taken from an airship or a tethered balloon of some kind?
Added by Campbell Ross on 18 March 2005
Campbell is right about the date. Aerofilms, who took this shot, was started up in 1919 by an ex-RFC pilot. As far as I know all their photography was done from small aircraft.
Added by Estelle Quick on 19 March 2005
The ring was part of a mechanism for bruising the oats stored in the granary. A horse would be harnessed to a horizontal pole and would walk round and round, working a system of cogs and wheels and shafts which went underground and up to the granary.

I remember the woodwork shed in the school being built in the early 1930s, so this photo is from after that date.
Added by Eric Malcolm on 25 May 2005
Administrator Comment: Date adjusted to 1935.
Added by Garve Scott-Lodge on 25 May 2005
Eric and Garve, if you look at the West Church above in close up, is that a central bell tower? If it is, it would suggest that the photo was probably taken before the church fire in January 1932.
Added by Campbell Ross on 25 May 2005
it looks like the disperser alongside the outer berth so surely that would give you some idea of the date. I think she only did two or so jobs in here. The Natal and the Ostrehav and if you look at the north facing berth you will see a large dark area which I think is scrap metal.
Added by Ronald Young on 17 August 2005
This photo is a copy of one of six images taken of Cromarty by Aerofilms (see Britainfromabove.org.uk for all the images and at very high res).
The image was taken in 1930, date from the flight log, and was one of a series of images taken locally.
Added by Allan Kilpatrick on 30 July 2015