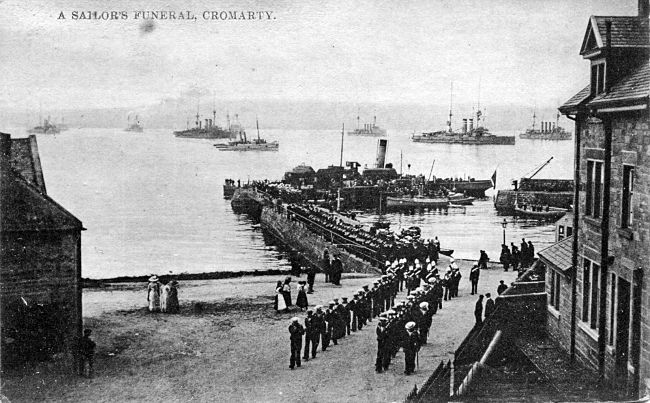 This picture seems to have been taken on the same day as picture #189 (Sailors coming ashore), and the ships in the two pictures seem to be in the same position. However, this picture has a caption 'A sailors funeral' The picture must have been taken from the window of the house on the corner of Bank Street and George Street.

The same procession can be seen further up the street on picture #289.
Picture added on 01 January 2003
Comments:
This photo is reproduced in This Noble Harbour, where it is identified as the funeral of a stoker from the Sanspareil who died in October 1901. However, the coastguard cottages on the right were still not built when picture #34 was taken in August 1902. The two four funnelled ships could be armoured cruisers, possibly of the 5th Cruiser Squadron (Achilles, Cochrane, Natal, Warrior, all launched in 1905). The ships were distinguished by white bands on their funnels: Achilles had no bands, Cochrane had single bands on the two inner funnels, Natal had double bands on the two outer funnels, Warrior had double bands on the two inner funnels. The ship on the extreme right might just be the Natal.
Added by Estelle Quick on 18 June 2005
Hi There,
I was very interested to find this photo of a "Sailors Funeral." I have two medals awarded to an Engine Room Articifer Fred BOON. R.N. He was born in Tiverton in 1871.
I have managed to find his service records and it states that he was Discharged Dead on 7th Dec 1902.
at Cromarty Hospital (Telegraphic) Cause of death was Cerebral Spinal Meningitis. (vide ships log H.M.S.Jackal) Could this possibly be the funeral of Fred Boon.??
I still have a few avenues to go down to double check, such as, at the landing stage in the photo, is it H.M.S.Jackal, also if I check the local Tiverton papers of Dec 1902 it should mention his funeral.

Added by James Mourton on 07 October 2005
The vessel at the pier appears to be a tug. H.M.S. Jackal was a tug employed on fishery protection duties around that time, she had two funnels and two masts, so is not the vessel berthed at the pier.
Added by Ronld Stewart on 02 January 2006